Events all too familiar 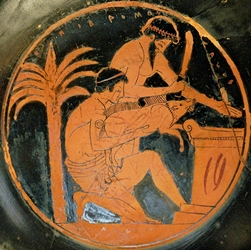 Just over two decades ago a band of adventurers went to stop a reported demonic ritual at skulltop hillock. As green smoke and orange flame filled the eyes of the dread fort the adventurers arrived to put an end to the demonic rituals they were told were taking place. There motivations and patrons are myriad for what they admit is their last adventure together after many years of working together. Some may not survive facing this excursion against elemental evil.

The party slew a group of orcs in the Jaw gate but noticed that their gear seemed strange and they had upon them unusual brands. Lukas the * noted that the murder holes in the SkullMaw gatehouse were not used in the fight but the sounds of boiling and roiling was detected.

The brave band pressed forward and next they battled a group of a half dozen myconids armed with spider silk & chitin armor and weapons. Telamothon noted that it is unusual for myconids to be so aggressive. Some of the bodies were burned badly but others were left to fester in the halls as time appears to be of the essence.

In their third battle they faced an ettercap and its giant spiders whom wrestled Caldo from the ground in its garotte despite their cunning plan to stealthily ambush their next foe. Alas, the legendary Malatesta boldness was in full display and the rest of the party had to rush forward to save him from the nigh invisible strands that choked the life from their swashbuckling friend. Despite the beast’s malice they let it go free in exchange for warnings and knowledge of the Elemental Evils they would face deeper in Skulltop Hillock.

The assortment of monsters was strange, their behaviours curious as you all venture deeper into the dungeon. Not everyone trusts the words of the freed ettercap but if it’s words ring true then ahead lay many and myriad mephits as well as piercers, a minotaur, undead, and those touched by the gifts of demons and dragons.

These orcs have a lot of parallel to the orcs that we fought near Banader river. Perhaps this is the same sect involved?

Very good point Jeffrey! There are, in fact, many parallels that occurred during the session which give hints of older roots. When you meet the ring leaders of this cult things will become clear about multiple character’s pasts as well as their futures, including a villain you all may have forgotten about! Also thank you for finding another grecian pottery painting to keep the motif going!